Recently we asked atheists on our Instagram page who they thought was the first person to crack the German Nazi Enigma, an act that many believed ushered in an end to WWII.

It wasn’t a surprise when many atheists responded with Alan Turing as their answer. 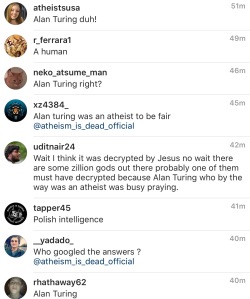 However, Alan Turing is not entirely the correct answer. This is possibly because the two movies on the subject, The Imitation Game and Enigma, are centered around Alan Turing and atheists tend to pass around fallacious information on Instragram without taking the time to research the matter thoroughly.  Alan Turing alone cannot be credited with the success of cracking the Enigma. Poland was first able to decipher the Enigma. At the forefront of this work was the Polish mathematician Marian Rejewski. In fact, there is a plaque in Bletchley Park which states in “commemorating the work of Marian Rejewsk, Jerzy Rozycki and Henryk Zygalski, mathematicians of the Polish intelligence service, in first breaking the Enigma code.” The US CIA page also attributes Poland with first breaking the code here.